Back in the early 2000s we use to cover Alexa, an Amazon related website ranking service here a lot. SEOs use it like they used PageRank, and how they now use Domain Authority or other third party website measurement services. Well, Amazon is shutting Alexa.com off, finally.

I am actually a bit surprised this news got so much attention because the service was barely used. Alexa is owned by Amazon and Amazon said it is closing it down on May 1, 2022. Alexa launched in April 1996, 25 years ago, as a web traffic data, global rankings, and other information on over 30 million websites.

Here is the notice on Alexa.com: 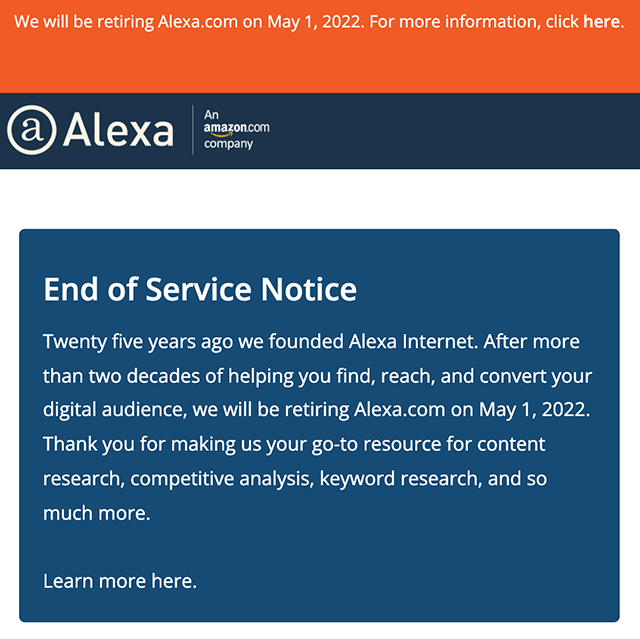 The last I wrote about Alexa was in 2019 when we said again Alexa is not used for Google ranking purposes. It is a myth we have been writing about since 2004 – no joke. SEOs would look for ways to inflate the Alexa rank thinking it had some impact on PageRank or something.

I even joked about it with Google’s John Mueller who wrote a poem about it going away:

Imagine there’s no Alexarank
It’s easy if you try
No DA below us
Above us only sky
Imagine all the people
Living for today.

Imagine there’s no AR
It isn’t hard to do
Nothing to link or pay for
And no PR too
Imagine all the sites
Living life in peace.

The funny thing is, when I made my April fools prank in 2003 or so for the Google PageRank Prediction tool, I used Amazon’s Alexa rank as part of the algorithm to figure out what your next PageRank score will be. I have no idea if this tool works anymore by the way – it never really did work because it was a prank.

So it is a good thing it is going away… Mostly, I think because of whatever confusion there might be with Alexa the voice search service and this – both owned by Amazon. But also for the legacy SEO myths around it.