The Daily Mail owner has filed an antitrust lawsuit in a NYC federal court against Google alleging Google punishes publishers, like the Daily Mail, in its search results if they don’t sell enough ad space through Google’s marketplace, like Google AdSense. The reaction from many SEOs on this news is pretty funny, basically saying that the Daily Mail does not deserve to rank for its content and it should spend the money it is using on the lawsuit towards improving its technical SEO and overall editorial content.

The Wall Street Journal reports “The Daily Mail’s concerns stem in part from its assessment that its coverage of the U.K.’s royal family in 2021 has been played down in Google’s search results, a spokesman for the publisher said.” “The U.K.-based Daily Mail, known for celebrity and pop-culture news, has built one of the world’s most-read websites, with 75 million unique monthly visitors in the U.S., according to the suit, which seeks unspecified damages. The suit also asks Google to discontinue its alleged misconduct and offer transparency into its news-search algorithm,” it added.

I asked Google for a comment and they sent me this, “he Daily Mail’s claims are completely inaccurate. The use of our ad tech tools has no bearing on how a publisher’s website ranks in Google Search. More generally, we compete in a crowded and competitive ad tech space where publishers have and exercise multiple options. The Daily Mail itself authorizes dozens of ad tech companies to sell and manage their ad space, including Amazon, Verizon and more. We will defend ourselves against these meritless claim.”

There are few SEOs I trust more than Michael Lewittes on the subject of news content around celebrity news, and he wrote on LinkedIn “The Daily Mail’s claim is erroneous. Google’s search engine is as related to its ads business as J&J’s Covid-19 vaccine is to its baby shampoo. The reason the Daily Mail’s articles don’t appear higher in search is arguably because the publication seemingly doesn’t adhere to several of SEO’s best practices, including but not limited to having a good user experience.” Michael said “the ads, which tend to slow down sites, are crowding far too much of the page. In the midst of it all is actually the article, which is circled in green.” Here is his example:

The Daily Mail’s claim is erroneous. Google’s search engine is as related to its ads business as J&J’s Covid vaccine is to its baby shampoo. The paper should use the money it’s spending on litigating instead on improving its user experience. pic.twitter.com/Od5mSWzgl8

Back in June 2019, one of the Daily Mail’s SEOs publicly noted the company saw a lost 50% of daily traffic due to the June 2019 core update. This drop was mentioned on page 47 of the lawsuit, thanks @AlexiMostrous (click to enlarge image) and it seems the traffic returned with the September 2019 core update: 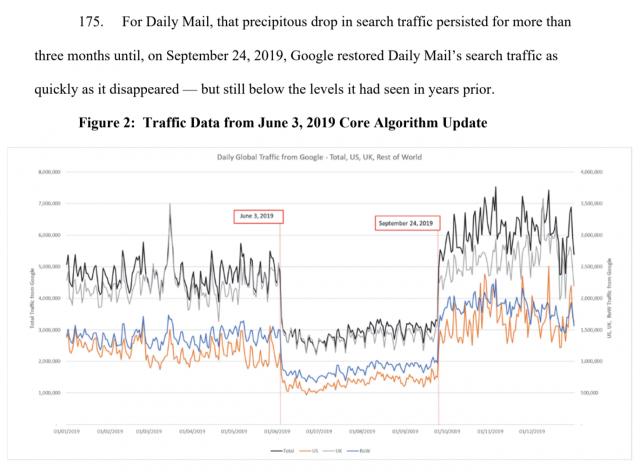 I think the Daily Mail has some work to do on their end and the money they are spending on the lawsuit will be better off spent on improving the overall SEO of the site.

Here is more of the industry reaction from SEOs:

I’m sorry but this is what happens when your business model is to publish falsehoods, trash & garbage for ad revenue. you reap what you sow. https://t.co/r2zcUihB28

Based on that thinking, I should sue Google for making algorithm changes designed to keep me in business! Care to comment @JohnMu

Have they looked at their own website? I want to sue Google for letting them keep half their traffic.

The ‘I don’t want to do hard work, so I’ll sue’ culture makes it to the SEO world… https://t.co/syQ8YprQf1

Tbh, I feel bad (well, not too bad, but kinda bad) for who ever run’s their SEO team. The mandate of “we want ads everywhere, and here is some really awful, racist, fear-mongering, content…. now make it rank” can’t be terribly fun! 😂

People are biased against the Daily Mail because it’s the Daily Mail and it’s trash but miss the point that many other news sites have the same bad architecture, terrible tech SEO, ads etc, but rank just fine which shows core updates are inconsistent and seemingly random.

Is It a Google Ranking Factor?