Here is sample source code of titles in SVG images: 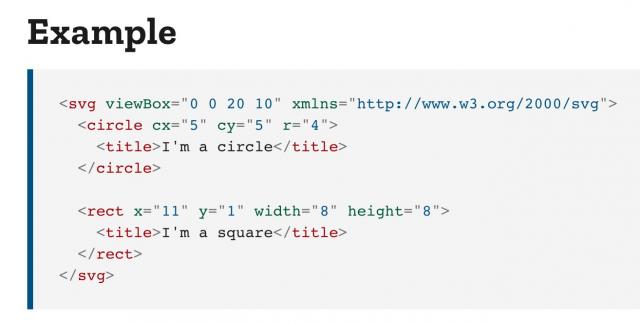 The concern is would Google pull the titles from the SVG and confuse those with the title attribute from your page’s source code, used for the title link in Google Search? The answer is no, at least, not anymore. Google had an issue with it a couple years back but not anymore.

I remember this recording, only after Glenn Gabe posted about it. It starts at the 17:27 mark where John was asked about this:

Hi, John. My question is regarding title tags. Traditionally, I was used to just having one title tag at the top of the page which would describe the subject of the page. But I’ve recently been using a WordPress page plugin that’s been adding title tags to SVG images. So when I look at the source code, I end up with approximately 19 title tags. Now, designers are telling us, perfectly OK. Google will recognize them. But I feel really uncomfortable about that. And what I’d like is some clarification of title tags within SVG images. Do you either ignore them altogether, or do you know it’s something completely different than the main title tag?

John responded that “I think this was an issue a couple of years back. But I think we’ve since resolved that.” He said “in general, I wouldn’t worry about this, especially if you’re seeing the search results are OK.” He goes on to explain that titles in SVGs would not have any impact on your overall web search rankings, he said “it wouldn’t cause any issues with ranking of the pages.” It might come into play with image search rankings but not web search, he added.

Here is the rest of the transcript:

JOHN MUELLER: I think this was an issue a couple of years back. But I think we’ve since resolved that.

And in general, I wouldn’t worry about this, especially if you’re seeing the search results are OK. So that’s something where I would do things go into search console and look at the top queries that people are using to find your website and then just try those searches out. And then look at the titles that are shown there. And if that looks OK, then I wouldn’t worry about it.

AUDIENCE: Well, the title tags are showing correctly. And the reason why I’ve looked in the code is that there are pages which I do feel where in index… but not run where I think it should be for the quality of content that’s said. They’re not running in the top 100. Really well-written, unique content. And I think it should be appearing somewhere, and I’m looking for the reason. Do you think it’s possible that they might contribute to confusion with Google?

JOHN MUELLER: I don’t think so, no. No. It’s something where, at least at the time when I first saw this we had problems with that, it was more a matter of we were accidentally taking these titles and showing them as titles in the search results.

JOHN MUELLER: And that’s kind of annoying, but it wouldn’t cause any issues with ranking of the pages. So just because you have multiple titles on a page– especially if they’re in SVG files, that’s something where we would say, like, whatever. That’s perfectly fine.

Here is the video embed:

Semantic HTML Is Not A Google Search Quality Signal

As Featured On Links To Publications Are Normal Links Says Google