Google’s John Mueller announced at Google I/O yesterday that Google now supports (currently in BETA) two new schema markups for video content. The first is Clip markup that provides segments to Google and the second is Seek markup that enables Google to use machine learning to automatically set key moments.

John announced this in this video at the 9:05 mark saying “To enable these features, we plan to support two types of markup. First, there’s clip markup.With this structured data markup, a webpage can provide information on segments or clips within a video. These segments can then be shown directly in the search results, making it easier for users to go right to a part of a video. It doesn’t take much to do this. You just need to provide a textual tag, a starting time, and a URL that goes directly to that timestamp. Then Google Search will be able to show those videos appropriately, but what if you can’t easily list the segment information for all of your hosted videos? For example, perhaps many people are using your website to host videos on their own. Well, for these cases, you can soon use seek markup. With this markup, Google can use machine learning to analyze your video content and automatically determine relevant segments for you. All you have to do is tell us how to link to an arbitrary timestamp within the video hosted on your pages, and we’ll do the rest. It’s magical. To enable this feature, use seek structured data on those pages so that we know how to link to parts appropriately. There’s more about this feature and its current status in our Search developer documentation. At the time of recording, it’s still in a pilot but we hope to make it generally available in the near future.”

Here is how Clip Markup works: 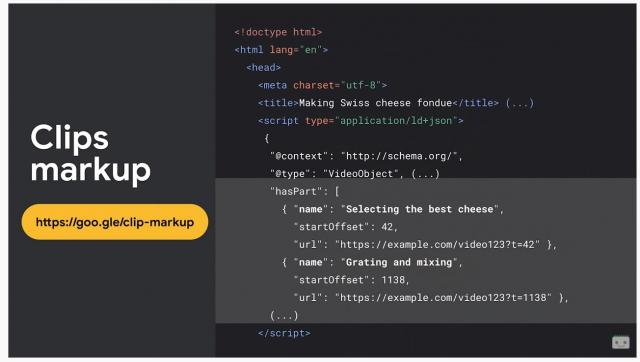 More details can be found in the developer docs.

Here is how Seek markup works: 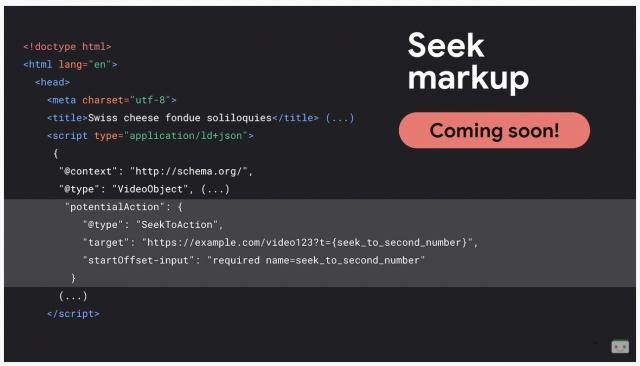 More details can be found in the developer docs.

We had hints that this was coming a couple of months ago.

Glenn summed it up nicely:

This is still being piloted now, but Google plans to make it generally available in the near future. So if you’re using video and want to control key moments via structured data, review the docs soon. https://t.co/r8CcY0uZ1U pic.twitter.com/BP4YRer6sX

To be clear, Clip markup is live, the Seek markup is in beta.

Google Has Moved Away From 200 Ranking Signals Number

The Top Opportunities & Risks for the Next Year [Webinar]