It looks like Google is testing embedding links in featured snippets again. It is hard to find examples of this but Brodie Clark and a few others spotted some examples. We first reported on this last November and then saw it come back in January – and now again, in September we are seeing it again.

Here is the example Brodie spotted and posted on Twitter – I was able to replicate it. 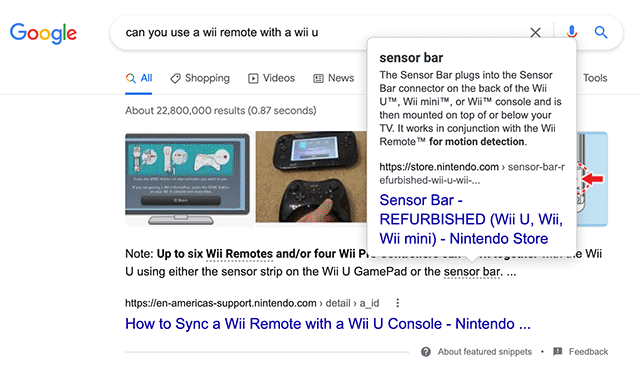 It seems like in this example for the search query [can you use a wii remote with a wii u] – I only see links in this featured snippet back to the original website featured in the snippet, i.e. Nintendo’s site. The old examples from November 2020, Google has links to third party sites, not from the featured snippet’s site. That caused a stir, as you can imagine.

Brodie said “Now only ever linking to either Wikipedia or an internal page with a single link embedded.” I did not see this myself and I tried dozens of different featured snippets but I suspect Brodie is 100% correct here.

Heads-up: Google is now showing bubble links in some featured snippets for all users in the US. This was after a break in testing of almost a year after some initial backlash. Now only ever linking to either Wikipedia or an internal page with a single link embedded. pic.twitter.com/PJnTEBGqz9

Update, here is an example with Wikipedia links:

Here’s another example of this happening for a term (not a person) pic.twitter.com/hxIC4v1Wul

Oh, Brodie just posted a heck of a lot more details on this over here.

Should You Disavow Links From Spammy Yet High Authority Sites?

Does Google Have A Problem With Big Robots.txt Files?