We may have seen a Google local search ranking update on Tuesday, June 8th. The BrightLocal tracking tool showed significant changes and volatility on June 8th, with a bit of heat also on June 6th and June 9th.

Here is what the tool looks like, showing a big 4.10 hit on Tuesday:

If you drill in and see which industries were most impacted, it seems like accounting and finance, then real estate and property businesses, then landscapers and then tradesmen. The rest of the categories did not seem as impacted by this local update. 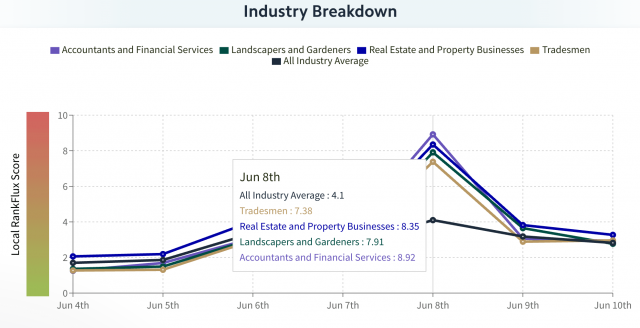 Google has not confirmed an update, and some are asking if this is related at all to the June 2021 core update – but I think that is unlikely.

I asked the folks in the Local Search Forum and this is what they said:

Colan Nielsen wrote “We are seeing several ranking reports with positive upwards movement that seems to coincide with the recent core update. What’s not clear to me is if the update had a direct impact on the local results, or if the impact is an indirect result of organic ranking increases due to the core update.”

The owner of Places Scout said “I’ve seen several cases where a business that has a larger distance from center (10+mi) is now ranking for keywords after the update they didn’t rank for before. Not sure if they made a minor proximity tweak or if it was a tweak that better matched that business with the keyword. Need to do some more digging.”

Did you notice local ranking changes in Google around these dates?

The 11 Best SEO Books You Must Read Today

Keep 301 Redirects In Place For A Year

3 tactics to improve CTAs for increased relevance and conversions