Google has announced yesterday afternoon that the Google page experience update is now done rolling out, this includes being fully live in Google Search and Top Stories. Google said in a week, it will also be fully live in the Google News App.

Google wrote “The page experience rollout is complete now, including updates to Top Stories mobile carousel. Changes to Google News app have started to rollout as well and will be complete in a week or so.”

Some might ask if this is related to the September 1 update – but I doubt it.

Here is the tweet with the original announcement of when it first started to rollout on July 15, 2021 and then finished on September 2nd:

The page experience rollout is complete now, including updates to Top Stories mobile carousel. Changes to Google News app have started to rollout as well and will be complete in a week or so.

As an FYI, I’ve been asking for updates on this update for a bit of time:

@JohnMu would know better but I think we said end of August which hasn’t ended yet.

Yes. But I don’t have an officially phrased answer yet :-). Yes is a good start though.

Some history; the Google page experience update was announced in May 2020, it was suppose to start rolling out in May 2021 but was delayed a bit.

Just a reminder, we were not expecting huge ranking shifts due to the page experience update, and we did not see any huge ranking changes related directly to this change.

You can find most of my stories on the page experience update over here.

Update: Here is the email Google News is sending publishers about this change coming next week: 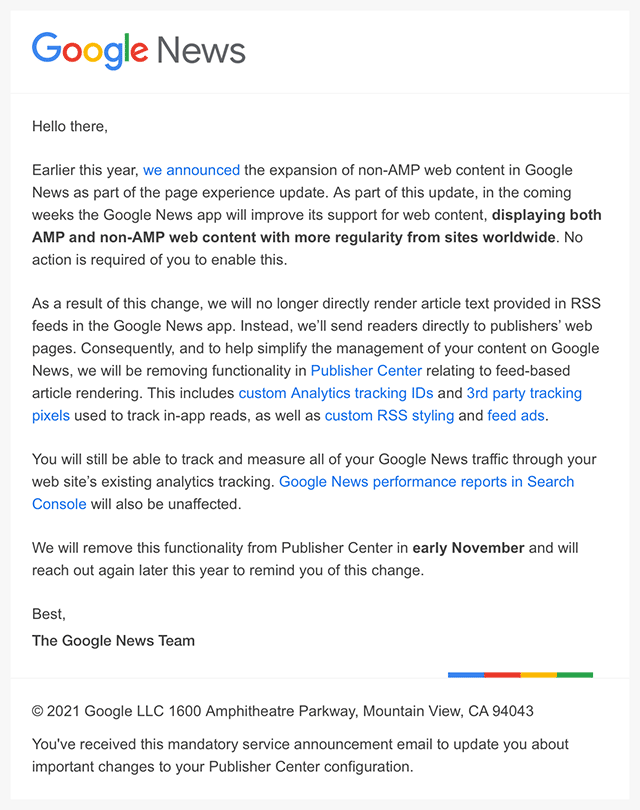 Rethinking Upsells & The Psychology of Opt-Ins vs. Opt-Outs

How Does Google Search Use Synonyms?