Around December 27th and 28th we may have a Google search ranking algorithm jolt or quick tremor. I highly doubt Google pushed out something over the holidays, this last week of December. But it might just be some weird change that jolted the search results (like that even happens as I am describing).

There was a spike in SEO chatter in the WebmasterWorld forums starting late December 26th through December 28th and some, but not all, of the automated Google tracking tools showed blips around December 27th and 28th. It is not unusual for Google’s search results to fluctuation without Google to manually push an algorithm update, but this jolt seems stronger than normal fluctuations. Maybe it was some sort of weird bottleneck or something, I have no idea.

Here is some of the chatter from the forums and social:

Our Google traffic and overall numbers have increased noticeably in the past couple of days, which frankly comes as a surprise for an international travel-planning site. The growth is in line with our standard pre-COVID traffic pattern: a low for the year before Christmas, followed by a slow but steady climb toward our annual summer peak starting around Christmas or New Year’s.

I spoke too soon…traffic was normal until noon, at which point it dropped off a cliff for the rest of the day…UK ended up -40% by end of the day. I am seeing these precipitous drops almost every day now. Traffic will seem normal until it just drops to 0-1 per hour for hours on end. This is what my UK traffic looks like this month:

I’m getting a very huge amount of traffic coming in from all over the world right now. It’s been happening since morning.

I don’t know if my G Real-Time has gone crazy or if it’s actually happening.

Is anyone else seeing something bizarre today?

Not me…a 79% drop in home page traffic today…search is down 51%. Both USA and UK down 45-48% at 1pm, Canada down 67%, Australia not one visit yet, Western Europe almost nothing. I have never seen anything like it before in my 17 years. All I can think is it must be a penalty of some sort as my ranking has been dropping and dropping this month…soon nothing left.

I’m seeing some increase in organic traffic today as well, and expect about a 10% total increase compared to yesterday by the end of the day. Traffic seems regular. Since the majority of this site is informational, there aren’t any direct conversions, but we’ll see what affiliates have to say in the next few days or weeks.

Legitimate traffic. AdSense with high conversion. USA and Europe is the majority. This started this morning. As usual, it never lasts longer than 1 hour. Today it’s been going on for the whole day. I hope it stays that way.

Yes, I won top positions on several terms. This usually appears for 1 hour when it happens. Today it spans all day. I hope this is permanent. If it wasn’t an update, my site finally surpassed my competitors…

Today I see so much junk traffic it feels like buyers forgot Google exits all started they shopping at Amazon or something!

Is there another Google update/adjustment going on right now? Seeing some volatility in my rankings and the trackers seem to be pretty hot @rustybrick @glenngabe

Like I said, some but not all of the tracking tools are showing blips around December 27th and 28th. Here are screenshots of those tools:

Mozcast – although the website is now showing lower numbers: 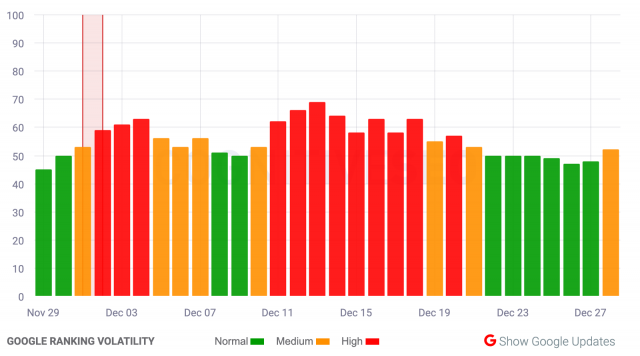 Things seem to be calming down again, so I am not sure what that jolt was – did you feel something?

How Construction Companies Rank In Search

How AI can automate SEO tasks at scale