There is again significant chatter within the SEO forums and signs from the automated tracking tools of yet another Google Search algorithm update. We’ve seen unconfirmed weekend updates from Google week after week for the past few months now and we saw a surprise unconfirmed update mid-week, this past week. And now we are seeing yet another weekend update.

Normally, I’d hold this story for tomorrow, but I am going offline tonight through Tuesday night and I won’t be able to stay on top of the changes over the next 50 hours or so. That being said, I am seeing big signs of yet another Google update and it is getting super repetitive now.

It seems to me that the May 13th update, which was not confirmed, is still heating up and brewing something. Here is the continued chatter from the ongoing WebmasterWorld thread:

Yeah me too. Also core update affected site. Clearly up today, biggest since the last core update (not expecting it to stick though, it never does).

Clearly they did something, tweaked / refreshed some algos they usually run at core updates. Not sure why Sullivan can’t just confirm this.

The USA companies only takeover of Google.com SERPs is complete in my widget sector.

From the top 10 of ny trade widgets NOT ONE non-USA company is now ranked on the first page and very, very few on the second page.

What do I say? Useless, biased, deliberately manipulated?

Whatever the reason it is now clear for all to see within my industry.

Yowzer. SEMRush off the charts for US and climbing for UK – and definitely seeing some odd behaviour (possibly indexing issues related) on a few sites I look after (that are not my own)

Ok wow, something absolutely wild is going on….on mobile, some breaking news terms are showing badly outdated results (and not until after a Wiki page, Twitter profile, Instagram and several “people also ask” obstacles). When flipping over to the news tab, the results aren’t even relevant to the term in some cases. Yet to assess desktop damage, but this is just…..weird.

There is clearly something going on.

I am surging significantly while almost all non-news site competitors are falling. Every single site in my niche (all legit industry sites) was brutally hit by the last core update and mostly replaced by news sites with thin content affiliate pages.

Most of these competitors are bigger (and older with better links and much more content) than me but they are falling, I am increasing. I do not expect this to stick. Even if it benefits me and it’s great, objectively it does not make sense.

My home page is down 66% from a normal Saturday at noon, while overall USA traffic is down 44%. Some of that will recover my end of the day, but it’s been a pretty steady daily reduction of 20% – 25% in USA traffic since the end of April. This is ridiculous…all of my inquiries are now coming from outside of the USA, very few inquiries (and no sales) from my own country!

I have noticed very strong UK and EU traffic, but Canada and Australia are alternating…one day one surges and the other vanishes, then the opposite. Anyone else seeing this?

Oh boy. Definitely something badly wrong. Just been running the personal Discover Feed checks and the issue with it being cluttered with old and irrelevant content is back again.

I can agree with some of the above. It’s very hard to find competitors in google if they don’t exist in your country’s database. For example. one competitor could be dominating India but if you search one of their strong keywords in the UK they won’t come up. Same with other countries. Since the core update I was limited to US only, I hardly exist online outside the US but it is beginning to change at a very slow pace. I have no idea why they chose this path in December’s core update.

The chatter is pretty hot right now and I do not expect it to die down over the next day or so.

The tools as well are showing big changes, here is what I see so far from the tools:

Mozcast (notice the new design) is up to 92 degrees, which is high for this tool: 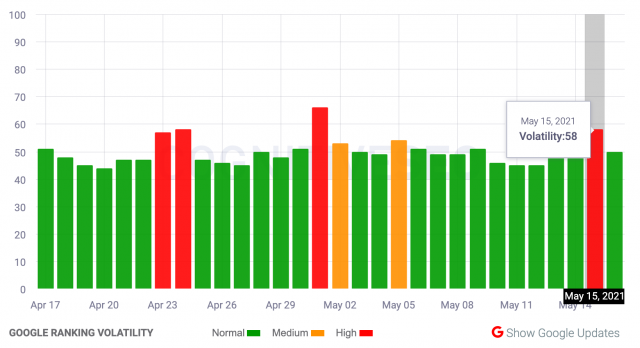 More of the same from Google with a weekend update but this one seems pretty big based on the chatter and rank checking tools all lighting up significantly this weekend.

How are things looking with your rankings over the weekend?

How Construction Companies Rank In Search