Google has confirmed that on June 28, 2021 it has released part two of the search “spam update.” Part two of the update started and completed on a single day, June 28th, like part one did on June 23rd. This impacted global searches across both web and image results.

So far, I am honestly not seeing that much of a reaction or signs of a big change in Google Search. I’ll share more details below on what we are seeing.

Part one did not make a huge splash in the SEO industry as far as I could say.

Google said on Twitter “The second part of our spam update has has begun today, and it will also conclude later today, unless we share otherwise.” So like part one, this part two was also started and concluded on the same day – June 28th.

The second part of our spam update has has begun today, and it will also conclude later today, unless we share otherwise.

Like part one, this part two impacted searches globally across both web and images:

Yes. It’s all part of the same thing, just a second part.

Here is some of the chatter I see in the ongoing WebmasterWorld forums. It is very light chatter, mostly with continued complaints about too much spam being in the search results. The chatter is early, the update was still rolling out when these comments were added. I am seeing very little chatter also in the black hat forums.

I don’t see any spam sites moving and in fact seeing the opposite. I see Cloaking, spam, spam and more spam.

They need to revert back to December 2020 as this is a disaster- even my 80 year old gran told me she got taken to a suspicious website yesterday.

No changes at all. New hacked/cloaked/spam domains this afternoon getting sucked in en masse. One new hacked domain of the same massive spam campaign I’ve been following has 23,000 fresh crawled and indexed pages over the last few hours.

This massive spam campaign (into the billions of cloaked pages directed to malware at this point) has been reported by me and others numerous times over the past 4 months to Google via their official spam reporting channel. Completely ignored.

Spam/scraped content is going to soon start affecting some of the larger sites and their queries, so we should eventually get movement on this.

Google query “see full list on apple”. Apple alone now has over 500,000 spam backlinks to it from that query alone, and that’s only picking up the tip of the iceberg.

Something’s happened, quite what I’m not at all sure however my global site has had 3 of its 4 best June days in the last 3 days as follows:

The UK hotel pub has also seen a big traffic upturn with its busiest day of the year and the highest since August’s Govt 2020 Eat Out campaign at 230%. … there, that should scew-up everything!

The tracking tools are also showing very little to no real change here. Less than in the first spam update. Here is what I see: 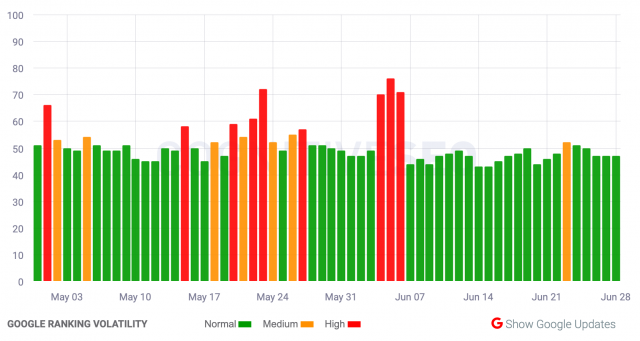 Maybe it is just too early to see any real changes from this spam update or maybe the changes are targeting some very niche spam that would not be seen in such a big way like a more general core update?

What do you all think?

How to Use Snapchat In Your Marketing Campaigns [Podcast]

Did YouTube Change Its Algorithm? No, It’s Seasonal Decline