After over a year of not having an update on the Google Search Quality Raters Guidelines – Google made several updates to the document yesterday, October 19, 2021. The last update was just over a year ago on October 14, 2020. The document this time around went from 175 pages to 172 pages – so it was trimmed down a bit.

Here is what Google said it changed in the document:

Groups of people section was expanded a bit, from the old version:

Information about or claims related to groups of people, including but not limited to those grouped on the basis of race or ethnic origin, religion, disability, age, nationality, veteran status, sexual orientation, gender or gender identity.

To the new version:

Information about or claims related to groups of people, including but not limited to those grouped on the basis of age, caste, disability, ethnicity, gender identity and expression, immigration status, nationality, race, religion, sex/gender, sexual orientation, veteran status, victims of a major violent event and their kin, or any other characteristic that is associated with systemic discrimination or marginalization.

Google did a very big revamp of the “Lowest Page Quality” section so I would read the new version, as I reported yesterday. Google also made several other changes listed above.

If you do a comparison of the old and new PDFs, there were 3,635 changes in total, with 807 replacements, 812 insertions and 356 deletions. And there were 1,288 styling changes and 372 annotations changes to the document. So a lot changed in it. Plus, like I said above, it is a few less pages.

Here are the previous versions, compared to the live version:

Here is the updated change log of this file from Google: 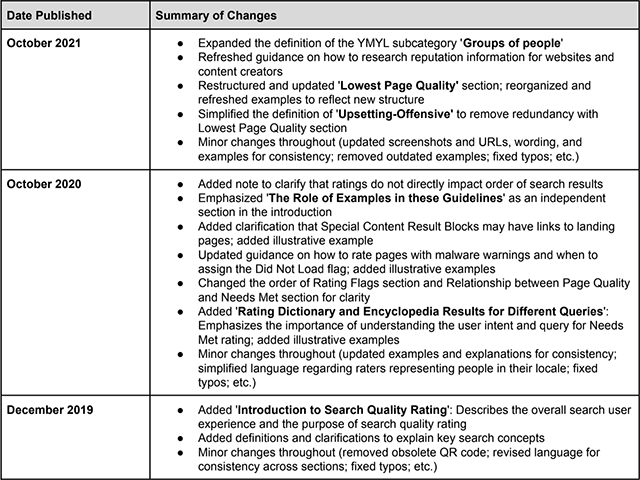 Jen Slegg did her usual deep dive into what has changed on her blog and this is what Glenn Gabe found:

Reputation research. Some things removed and then other parts edited: pic.twitter.com/JfYf8XyOdk

Google Search Carousel With Results In Your Local Language, Despite Language Of Query

How Neeva is Creating A Search Experience Without Ads [Podcast]